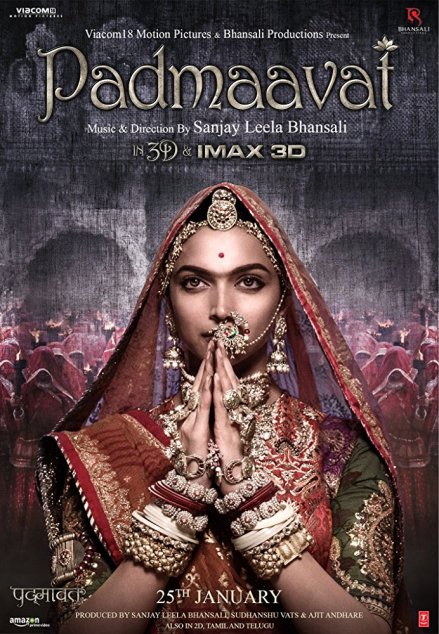 Note: there are no spoilers in this review.

Padmaavat is a period drama based on an epic poem written in 1540 by the Sufi poet Malik Muhammad Jayasi. This is a fictional story about the Delhi Sultante Alauddin Khalji’s (Ranveer Singh) desire for the most beautiful woman, the precious Queen of Chittor Rani Padmavati (Deepika Padukone). Padmavati and her husband, the Rajput ruler Rawal Ratan Sen (Shahid Kapoor), fight to protect the Rajput honor from Alauddin’s merciless rage.

Fun facts – did you know?

On the whole, Padmaavat is a film that you should see once. If you’re a Deepika or Ranveer fan – this is a must-see, but go with low expectations and just enjoy the Bhansali experience.

Raees is a fictitious story of how a young boy named Raees spends his life becoming the leader of a smuggling enterprise – bringing in alcohol to the dry state of Gujarat, India. His mission in life is to have the utmost faith in business, until it is harmful to others. A mafia don turned politician, Raees uses his crime wealth to help the impoverished community while fighting the the police (Nawazuddin Siddiqui) and corrupt politicians along the way. Raees’s character is comparable to that of Pablo Escobar, the Columbian drug lord, and also that of Abdul Latif, a Gujrati gangster who rose to fame in the 1980s by dominating the illicit liquor business.

In summary, don’t sweat it if you miss Raees in the theaters. You can skip it entirely unless you’re a die-hard SRK fan.

Bollywood is off to a spectacular start in 2017! This new year brings a few remixes of old classics that are becoming quite popular with this generation’s listeners and dancers. A.R. Rahman’s “The Humma Song” is remixed from the original 1998 “Humma Humma” from the movie Bombay.  “Laila Main Laila” from Raees starring Shahrukh Khan is a modern day take on the original from the movie Qurbani in 1980. Ok Jaanu holds several spots on this week’s charts, and likely will keep #1 for several more weeks to come! Close behind is my favorite of the week, the garba song “Udi Udi Jaye.” This track will surely be a popular one for wedding performances. Check out the full list below.

Bollywood cinema in the year 2016 ends with the much-awaited release, Dangal, starring the one and only, Aamir Khan, and impressive debutants Fatima Shaikh and Sanya Malhotra. Dangal (translation: “wrestling arena,”) is a biographical sports drama based on the female Indian wrestler, Geeta Phogat and her sister Babita Kumari. Geeta Phogat is known as India’s first female wrestler to win (gold medal!) at the 2010 Commonwealth Games in Delhi. Dangal tells the story of how Geeta’s father and former wrestler, Mahavir Singh Phogat (played by Aamir Khan), struggles to coach his daughters to achieve this noble victory in a society where women are not recognized in the “man’s sport” of wrestling. How do the girls achieve this feat? Can they make their father’s dream come true? Check out Dangal to find out!

Fun Fact: Dangal has already hit the 300-crore club in just 13 days since its release, surpassing Sultan and PK.

In summary, Dangal is a must-see Bollywood film that you don’t want to miss. Perfect for a family outing including parents, kids and senior citizens. Whether you’re an Aamir fan, a sports fan, or a daughter, father, or sister, this one’s for you! 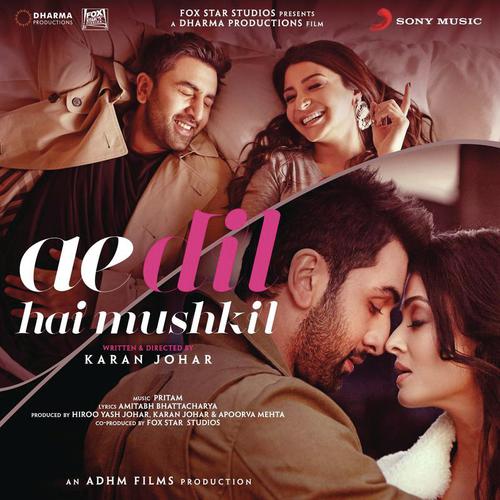 Ae Dil Hai Mushkil is this Diwali’s “masala” film – love, laughter,  romance and tears. The story is about an aspiring singer and MBA student, Ayan, who falls in love with a happy-go-lucky girl, Alizeh (Anushka Sharma) on a European adventure. Alizeh, however, doesn’t love him back –  she’s still in love with her ex, DJ Ali (Fawad Khan). The story questions, can a guy and girl be “just friends”? Can you fall in love again if you’ve been in love before? What is it like to love somebody who will never love you back?

On the whole, Ae Dil Hai Mushkil is this year’s romantic drama that has Karan Johar’s love life written all over it. If you’re a fan of his type of movie, or want to see Aish on the big screen, then definitely check it out in theater. Otherwise, leave it to watch for a date night at home.

Fun Facts: Did you know this is Aishwarya’s first time starring in a Karan Johar film?

Rated: R (not suitable for children under 17) 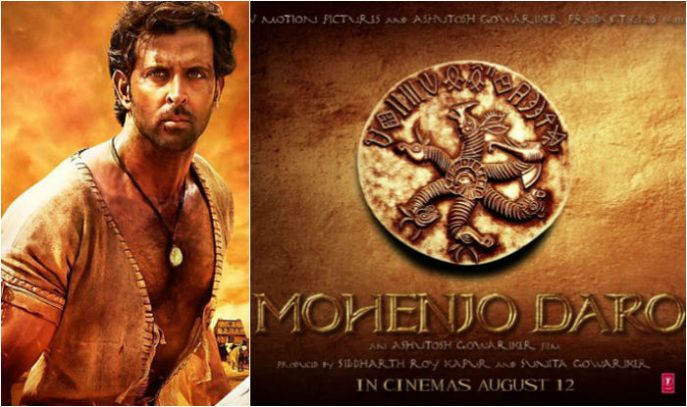 “Mohenjo Daro” is an adventurous love story that takes place in the year 2016 BC. Hrithik Roshan plays the role of Sarman, a character who will remind you very much of “Aladdin.” Sarman lives in the village of Amri in the Indus Valley and is very eager to explore the nearby civilization called Mohenjo Daro. He finally sets off to see this land to feels that somehow this city is connected to him. Classic Hindi movie plot: Sarman meets and falls in love with the daughter of the City Priest, Chaani (played by Pooja Hegde). Tensions arise when the city’s evil aristocracy get in the way of Chaani and Sarman’s wish to be together. Watch the movie to learn about how Sarman discovers his roots to Mohenjo Daro and fights for his love, Chaani.

1. The setting. If you want to learn about pre-historic India and the civilization of Mohenjo Daro, this is the movie for you! Fun Fact: This is the first and only Bollywood movie so far that depicts this era. Mohenjo Daro is a UNESCO World Heritage spot that is now Sindh, Pakistan. It was one of the world’s earliest major urban settlements. The site was abandoned in 19th century BC, and was later rediscovered in the 1920s!

2. Hrithik’s acting was the best out of all the other cast members. He also looks “Greek God” gorgeous, even in his simple, rustic village clothing. Yes, even pre-historic Hrithik has dance moves.

3. The songs and music – absolutely stunning soundtrack by A.R. Rahman! You can never be disappointed with that 🙂 My favorite was “Tu Hai” – the video makes a lot more sense when you know the story..!

1. The extended story line – “Mohenjo Daro” starts off as your typical predictable Hindi movie… but this was OK because you are distracted by the time/era the movie takes place in. Then after about 1/2 way in, you expect it to end.. but no.. the story just continues…another 30 minutes goes by and you are at, what you think, the grand finale scene! Nope, it’s just intermission…

2.  Lead actress Pooja Hegde – she looked the part pretty well but her acting could definitely use some work. She definitely wasn’t as convincing as her role asked for..

3. Dance choreography – quite interesting as they tried to depict what dance may have been like in this era. I appreciated the classical, “story telling” type hand gestures. I do feel they could have enhanced Chaani’s dance steps to be more graceful and intricate as they were far too basic for A.R. Rahman’s melodious soundtrack.

4. The CGI – absolutely unacceptable quality!! Made me cringe.

In summary, the much awaited “Mohenjo Daro” disappointed many Ashutosh Gowariker and Bollywood fans. It may be worth a watch if you LOVE Hrithik or if want to learn about pre-historic Indian era. If you choose to see this in theater, leave your brains and high expectations at the door, especially for the second half of the film.

Without a doubt, this summer’s hottest soundtrack is A.R. Rahman’s “Mohenjo Daro.” To be released August 12th, this is Hrithik’s next film after two years off the screen. Don’t miss the very romantic track “Tu Hai” – my favorite! The entire soundtrack is very majestic and soothing – perfect for the morning hours! Other hits this week are from the new movies starring Salman Khan, “Sultan” and Akshay Kumar’s “Rustom.” Are you a Katrina fan? Check out her newly released dance number with Siddharth Malhotra, “Kala Chasma.”

Here are this week’s top of the charts! This year’s Diwali season comes to a close with Imtiaz Ali’s film, “Tamasha.” This is not your average Hindi movie…so don’t expect several song/dance numbers or a typical love story. Rather, it’s an abstract drama that will keep you hooked after the first 45 minutes of the movie. Ranbir and Deepika’s characters are two strangers who meet in Corsica on vacation and decide to not share their real identities with each other for the duration of their trip. They also agree to never meet or make contact ever again…but that’s just the beginning of the story. If you’re a Ranbir Kapoor fan, this is a MUST see for you. I’m pretty sure he will be nominated for some awards for his performance in this film. Deepika’s performs well and of course still looks stunning in casual attire/minimal makeup throughout the movie. Ranbir and Deepika make excellent co-stars, as they use to be a couple in real-life!

On the whole, “Tamasha” is worth a watch if you’re a Ranbir or Deepika fan, but otherwise don’t sweat it, especially if you’re not a fan of unconventional Bollywood movies. 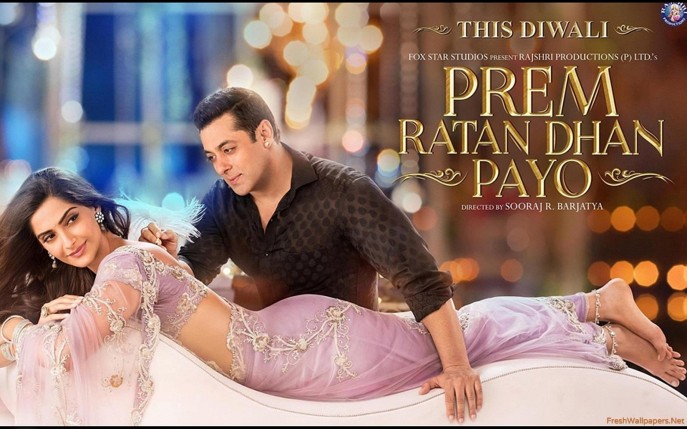 This Diwali’s Bollywood release, Prem Ratan Dhan Payo (PRDP), tells a story about a charitable, lighthearted man, Prem Dilwale (Salman Khan), who is on a mission to meet the philanthropic and beautiful Princess Maithili (Sonam Kapoor). His “Prince and Pauper” comedic role is the highlight of this film. PRDP is not just a love story, but actually moreso a glorified Zee-TV drama about family conflicts between siblings. If you’re a Salmaan Khan or Sooraj Barjatya fan, don’t miss this film – otherwise save your popcorn money on something more worthwhile.

On the whole, PRDP is nothing more than a time-pass Bollywood film to enjoy with your family this Diwali season. Leave your brains and high expectations at the door. 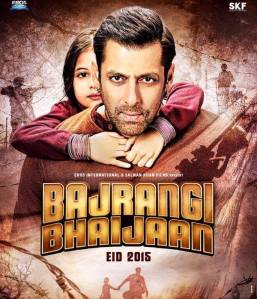 Synopsis: Salman Khan, “Bajrangi,” is a Hanuman-loving Indian citizen who stumbles across an innocent, mute 7 year old Pakistani girl, “Munni” (Harshaali Malhotra) who is lost in Delhi and cannot find her family. She follows Bajrangi and he eventually takes her to his home. He develops a strong, loving friendship with the girl but eventually takes it upon himself to return her back to her family. This film tells an endearing story of how Bajrangi and Chand Nawab, a Pakistani reporter, try to find Munni’s home in Pakistan. “Bhajrangi Bhaijaan” is a heart-warming tear-jerker that you don’t want to miss!

2. This is NOT your typical “India/Pakistan” love story/war movie. It is, though, an emotional roller coaster of drama and comedy – be ready to laugh and shed some tears!

3. The first song, “Selfie Re Le Le” is very fun, upbeat, colorful and catchy – it definitely lightens the mood at this point in the story. What’s a Salman Khan movie without his classic dance movies??

4. Salman plays the antithesis of his normal Bollywood hero roles. It almost feels like he is trying to make up for his real-life sins by playing a virtuous, modest, humble man in his reel-life.

2. Too many slow-mo, dramatic, hindi TV-show type shots. Picture two lovers running through the fields towards each other – except this time it’s Salman and a little girl.

3. “Chicken Dance” was the worst song in this movie. It seemed like a filler song meant for a kid’s movie.

4.  Kareena Kapoor, “Rasika,” did not play a major role in this film. No item songs in this movie, guys. Harshaali was most definitely the lead actress and superstar of the film.

Fun Facts: The scene where Nawazuddin Siddiqui is introduced as the reporter is actually based on a 2008 YouTube video called “funny Pakistani reporter.” Ha!

What did Aamir Khan have to say about Bhajrangi Bhaijaan? Check it out!

Overall – this movie is a Bollywood HIT meant for everyone to see, even if you are not a Salman Khan fan. No worries if you missed it in theaters – be sure to check it out on DVD. 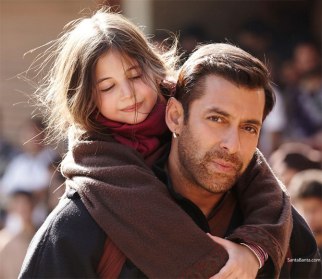